The Woman Who Found A TARDIS: The Ghost Monument Review

First, I have decided to try and put "The Woman Who..." in the title for every 13th Doctor story. Before you or anyone else start going on about 'sexism', I note that I did something similar with the 12th Doctor.

Given how She has been built up, I decided I could have some fun with Her too and thus, The Woman Who Found a TARDIS or The Ghost Monument.

Now, as for the episode itself, I see we still have one problem: the Doctor Herself. It is not that She is a Woman. Rather, it's that She isn't very original. For all the hue & cry about The First Female Doctor, I simply cannot imagine why they want her to be a Tennant/Smith clone.  The Ghost Monument, for all its virtues (and it does have them) is still struggling to find itself.

Oh, and the new TARDIS is damn ugly!

The Doctor (Jodie Whittaker) and Her 'friends' Graham (Bradley Walsh), his step-grandson Ryan (Tosin Cole) and random person Yasmin Khan (Mandip Gill) survive being caught in deep space by two convenient spaceships that happen to be competing in the "Last-Ever Rally of the Twelve Galaxies".

No, this isn't a variation on the Fifth Doctor story Enlightenment, thank you very much. 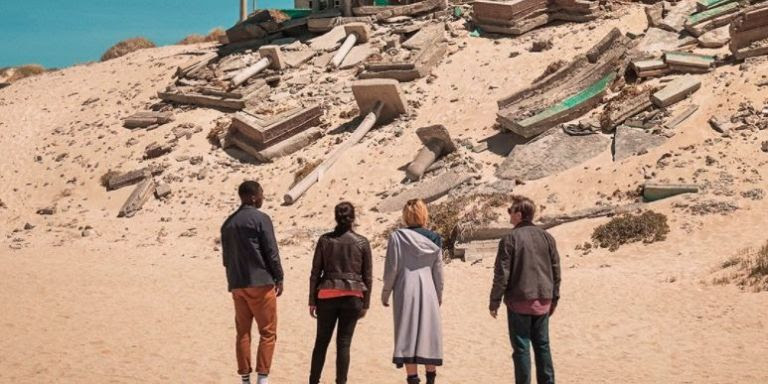 They are separated, with Her and Yaz ending up with Epzo (Shaun Dooley), a Russell Crowe-type with a bad attitude and a rickety spaceship. "This thing should be on Antiques Roadshow", She at one point hollers.  Graham and Ryan are on another ship captained by Angstrom (Susan Lynch), who thinks they are 'bonuses' in this race none of the others are aware of.

They all finally land on the planet Desolation, where eventually they reunite. Epzo and Angstrom receive their final instructions from Ilin (Art Malik), the game-master who is not reminiscent of The Celestial Toymaker.

Despite Epzo and Angstrom really wanting to work against each other to win the ultimate prize: bountiful wealth and security on a safe planet, She gets them to work together. They come upon an abandoned city and She is puzzled not just as to why Her TARDIS was not in the same place Her calculations placed it at. She also wants to know why this formerly lush world is now dead.

She also wants to get to 'the ghost monument', which is really the TARDIS. Her "Friends" go along, as they really don't have an option, but if they reach the TARDIS, that should get them all home.

In this desolated city, they face many dangers: killer robots and killer floating cloths. She also discovers why Desolation is as it is: their scientists were forced to work to engineer new methods of death. "We gave them our minds and they made us Creators of Death", She reads, forced to by the Stenza, one of whom we met last time.

As a side note, am I the only one who thinks 'Creators of Death' would make for a great title?

She manages to show that indeed 'brains beat bullets', but the floating killer cloths also tell Her about 'The Timeless Child', something apparently connected with Her that even She does not know.

As they reach the finish, Epzo and Angstrom seem on the cusp of fighting it out to win, until She comes up with a compromise.

Before Ilin, they declare themselves joint winners. Ilin is aghast at such an idea, but they bully him into declaring for the first time ever dual champions. He then promptly spirits them away, leaving the others stranded. She feels like a failure, until the TARDIS materializes. "Come to Daddy...I mean Mommy...I mean..." She says, and soon She enters Her newly-redecorated TARDIS, and it's off for another adventure. 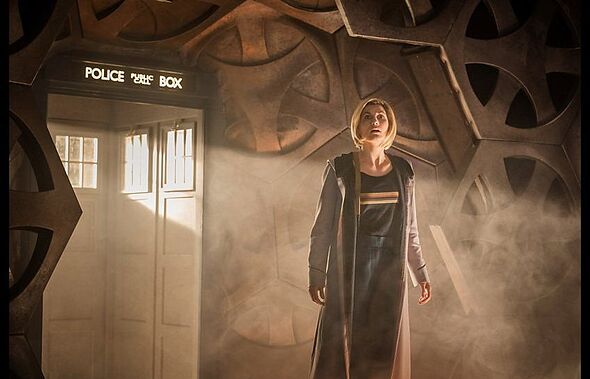 Perhaps my dislike of The Ghost Monument has to do with the TARDIS itself. I thought it was the ugliest thing I have seen, well, apart from both the Sixth and Thirteenth Doctor's costumes. It's all dark and remarkably empty, with little light.

Of greater concern is Whittaker.  Here, let me see if I can explain this well.

It is not that she is a woman that causes me concern. Contrary to popular belief, I have never objected to a Female Doctor if it could be shown it was done for story purposes. That, however, was not the primary reason we were given a Female Doctor. The primary reason was that 'it was about time we had a Female Doctor...for representation, equality, little girls to have heroines of their own'. I never thought this was a good reason to have a Female Doctor, and to be honest those who supported this reasoning have been overtly hostile to any objections.

Be that as it may I wish Whittaker or writer/showrunner Chris Chibnall would stop her from playing The Doctor as 'quirky'. She needs to make The Doctor Her own, not do a variation of David Tennant or Matt Smith's version. Whittaker's Doctor seems terribly frenetic, spouting lines in a rapid-fire manner and worse, saying the dumbest things.

Take this exchange between Her and Graham after She offers to lend him some shades. "I can't remember whether I borrowed them from Audrey Hepburn or Pythagoras". Graham, sensibly, says that Pythagoras didn't have shades, to which She replies more to Herself than to him, "Obviously never saw Pythagoras with a hangover".

That line, apart from being too jokey for things, is something I could hear Smith's Doctor saying. Part of me understands wanting to move away from the crotchety old man Capaldi was going into, but at least he was markedly different than the childlike Smith or swoon-worthy Tennant.

I think Whittaker can be a great Doctor. There, I've said it. I think she has the capacity to not only make the role her own but convince me that she IS The Doctor. She, however, isn't going to do it by merely imitating the popular Doctors from days gone by.

Whittaker has moments of this, such as when she berates Ryan for trying to use weapons to win or when coming to conclusions about what happened on Desolation.  There is potential for her to own the part and be The Doctor. She just needs to get away from doing impersonations, otherwise the gender change would have been for nothing.

Malik was underused and Dooley was doing some kind of Russell Crowe gravelly, angry man. Chibnall's script gave us a touch of backstory with a tale of what would be child abuse, which was good in terms of acting and story. Lynch's Angstrom was better to where you wanted her to win, but only because she seemed to have a more fleshed out character.

Of the Companions, I'm liking Walsh's Graham, who seems the most sensible of the lot. He does what good Companions do: he asks questions and actually questions The Doctor, not willing to defer so quickly. Gill's Yaz might just as well been taken hostage for all she did. She was wildly underused to where she was superfluous to The Ghost Monument, though that should be expected when you have three Companions. Cole's Ryan is somewhere in the middle: coming across as somewhat dumb but at least willing to take action.

As I reflect on The Ghost Monument, I think I like it more than I first thought. The story went by fast and Segun Akinola's score is quite good: subtle and effective. There is some good word-play in it. When asked if anyone's confused, Yaz says "Pretty confused", Ryan says "Proper confused" and Graham says "Way beyond confused".

There are issues that concern me. The 'Timeless Child' and Stenza bits suggest a story arc despite the insistence that there would be none and that each would be a stand-alone story. The lack of screentime for both Gill and Malik. Whittaker's take on the Doctor as more an impersonation of Smith and Tennant than her own creation.

It is still early and there is room for improvement, but I hope they do up the game, otherwise we're going to get the same thing we've seen before.