I don't know whether it is coincidence that The Power of Three involves cubes, which in mathematical terms is Anything to the Third Power (or put another way: the power of three) and/or that it can also refer to the THREE Main Characters (The Doctor, Amy Pond, and Rory XYZ) working in tandem (the power of three).   From what I saw, this was addressed at the very end of The Power of Three, a story that has oddly enough, two strikes against it: One, a voice-over narration (something I dislike in general but which we just had in A Town Called Mercy) and Two, nothing of real interest.  So what else can get this episode going?

Amy (Karen Gillan) recounts of the time when the Doctor (Matt Smith) came to stay with them.  We are in July 2012 (which I will prove later), but she and her husband Rory We-Don't-Know-His-Last-Name (Arthur Darvill) are finding living in the real world (as opposed to living The Doctor Life) has some burdens.  They can't make time for family, friends, jobs, what have you.  However, we now have a point in time when the Doctor is forced to go domestic, during The Slow Invasion.

The Whatever-They're-Called don't know the world has awoken to billions and billions of black cubes (a little Carl Sagan deal bit) until informed by Brian Williams...

No, not THAT Brian Williams, American news broadcasters (though I'm sure he probably would have, and it does make me wonder whether a great opportunity was lost by the Doctor Who team by NOT having the NBC Brian Williams pop up, given the cameos by people familiar to the British population), but THIS Brian Williams... 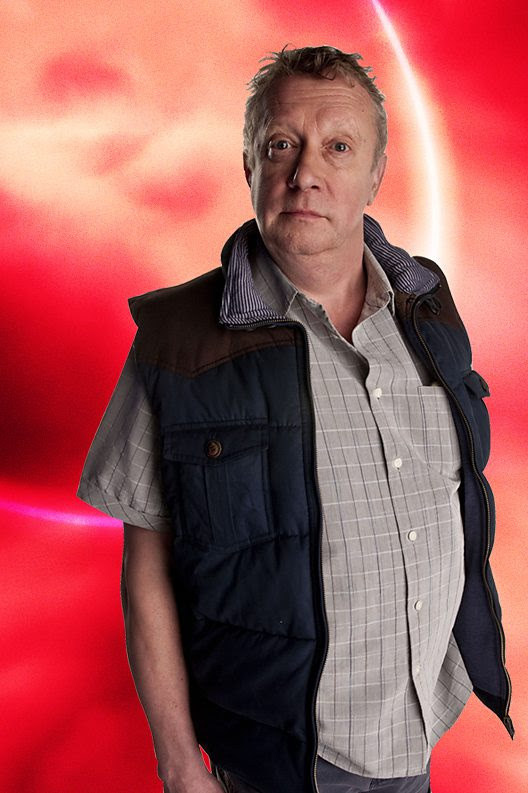 Rory's dad (Mark Williams).  Where there are mysterious black boxes, we are sure to find a man from a mysterious blue box.  That's right, The Doctor's back!

Curiously, it's Brian that comes up with some good ideas about what these boxes could possibly be.  The Doctor is intrigued but not particularly interested until U.N.I.T. (the UNified Intelligence Taskforce, formerly the United Nations Intelligence Taskforce) storms into Amy & Rory's home.  U.N.I.T. is headed by Kate Stewart (Jemma Redgrave), who has tracked the Doctor to it.

These cubes are all around the world, and then they do...nothing.  The Doctor opts to wait and observe, but our hyperactive Time Lord finds all this waiting around dull.  As much as he tries, he can't do it.  This is in sharp contrast to Brian, who is perfectly content to observe the cube, sending e-mails to U.N.I.T. (he pronounces it letter-by-letter as opposed to the usual version which says 'UNIT'), but months go on with nothing happening.

In October there's an engagement party where Amy's asked to be a bridesmaid at a same-sex wedding and she accepts; the fact that Rory is dancing to David Guetta's Titanium (released in December 2011) means it has to be October 2012 at the earliest (though I grant that it can be later).   Rory meanwhile, has decided to accept a full-time nursing position.

Both, it appears, are moving on with their lives.

However, around Christmas time (or Winter Solstice time, take your pick), the cubes finally start doing things, though no one notices people disappearing at the hospital Rory works at and a creepy little girl hanging about.

Some left him, some got left behind, and a few, not many, died.

Bet you NuWhovians couldn't mention those Companions killed off...

Finally, in July (a full year later), the cubes start becoming active: doing everything from checking pulses to playing The Chicken Dance (a hallmark at all weddings, even same-sex weddings I imagine).  Just as soon as they start, they stop.  Why?  Not even Kate Stewart, whom we discover to be the daughter of the Brigadier himself, knows.

Soon, we find that the boxes cause mass heart failures to anyone exposed when they count down to zero, including to one of the Doctor's two hearts.  The signal is traced to Rory's hospital, and best hurry: the creepy orderlies have taken Brian, who just happened to be there.  We find that the Shakri are there to kill a third of the humans before humanity can travel through space.  The Doctor defeats them, and we know what the Shakri don't: the real power of cubes--The Power of Three.

For better or worse perhaps I should resign myself to the idea that Doctor Who is no longer going to be about an alien travelling through time and space with (mostly) humans.  Instead, Doctor Who is about humans who bump into an alien travelling through time and space, go with him for a while, upset their personal and family lives, then get big send-offs.  NuWho is now Companion-centered, not Doctor-centered, and The Power of Three reflects this idea that the Companion is the center of the story.

There are some things to like in The Power of Three.  Williams is still delightful as Rory's dad (anyone else thinks he might make a good Companion, although he will not be listed as such by me), even if he really isn't integrated into the story.  It might have to do with the fact that writer Chris Chibnall has in The Power of Three merely given us an extended edition of Pond Life, that series of mini-webisodes that touched on the domestic lives of the Williamses when not with the Doctor.

We see this in how the months appear on the screen.  'June' appears on the grill for example.  I don't know if Chibnall was aiming to repeat himself in The Power of Three, or if director Douglas Mackinnon just accommodated him, but we pretty much have a story less about alien invasion than about the domestic bliss the Companions find away from the Doctor.

In fact, it almost is a case AGAINST travelling with the Doctor and a case as to why the Doctor should just settle on Earth or some other planet and live out his remaining regenerations in quiet retirement.

Can The Power of Three therefore be a case for cancelling Doctor Who?  If travelling with the Doctor is such a disruption in everyone's lives, why then do so?

There really is very little in The Power of Three that holds much interest.  There are some wonderful things (Brian Williams, seeing Jemma Redgrave as Kate Stewart and seeing HER integrated into the episode well), but like The Doctor, one does wait for SOMETHING to happen.

Furthermore, because we spend so much time focusing on how the Williamses/Ponds have found a good life away from the Doctor, that when we get to the raison d'etre of the cubes (a planned extermination of humanity) it almost seems an afterthought.  This is why the last few minutes seem so wildly rushed and the resolution (Oh, I'll just reverse everything since the Shakri really weren't here) equally rushed.

Add to that a weak villain.  The Shakri appear to have wandered away from a Star Wars convention (I thought it was the Emperor Palpatine coming after humans.  Wouldn't it have been great to have had Solomon from Dinosaurs on a Spaceship return for revenge?).  The creepy orderlies appeared to be channeling the monsters from The Empty Child Parts 1 & 2 (The Empty Child/The Doctor Dances) while the little girl reminded me of Fear Her (don't know why since I haven't seen that episode, but for some reason it came to mind).

In short, it almost seemed that the alien invasion was almost irrelevant, as if it HAD to be there because there has to be some sort of alien threat in Doctor Who.

As a side note, I think same-sex marriage (like the one Amy refers to when she tells her female friend it was time she made an honest woman out of her) has lost its shock value.  What would be shocking today would be if there were a heterosexual marriage on television that lasted fifty years and was happy.  That's something you don't see anymore on telly, ain't it?

I will say that Redgrave gave a great performance as the Brig's daughter and that perhaps she will return (even though I'm divided on this idea of introducing characters in one episode just to bring them back later...Captain Jack, River Song, Wilfred Mott, now perhaps Kate Stewart.  It's wearing thin).  Again, Williams was great in his mix of comedy and seriousness (the look on his face when he's wheeled away from the Shakri is priceless).

I've now all but grown to be an anti-Smith partisan.  I don't find his Doctor endearing or goofy.  I find him a prick.

The Power of Three isn't interesting when it comes to the alien menace, and I don't think it was meant to be.  Instead, it is suppose to be about how the Doctor continues to affect his Companions lives after they leave him.    A good story is available somewhere about that.  Of course, once upon a time Doctor Who was about the Doctor, not about his Companions: out one Companion went, in came another, but always travelling with the Doctor.  Nowadays, it's all about Rose and Donna and Amy.

Well, given how much The Power of Three is obsessed with that number (cubed, a third of the population affected by the little black boxes), I aim to accommodate the story.

Next Story: The Angels Take Manhattan
Posted by Rick at 8:01 PM