The Doctor's Quite Bizet With Soufflés 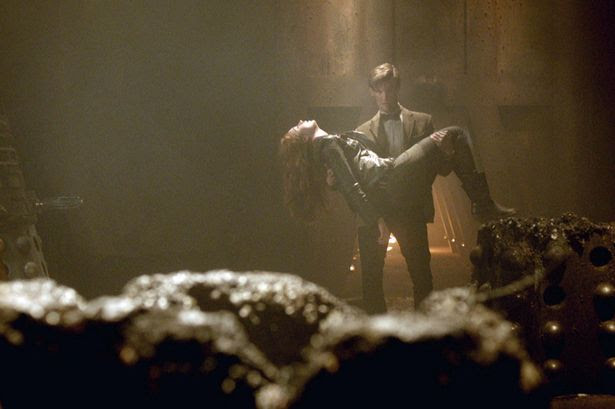 STORY 229: ASYLUM OF THE DALEKS

You can't have a good Doctor Who story without the Daleks.  Well, actually you CAN have a good Doctor Who story without the Daleks and you can have a bad story with the Daleks, but I digress.   Asylum of the Daleks is the first story of the Seventh Series/Season, and I figure it was felt that it might be a great opening to have the best Doctor Who monsters (sorry, Weeping Angels) be the villains of the opening to the farewell saga of the Williamses...oh, sorry, the Ponds.  As someone who has grown despondent over where Steven Moffat has taken River Song (Formely Known as Doctor Who), I was surprised at how good Asylum of the Daleks was, although curiously, Moffat was not a major part of the story's success.

The opening to AOTD is epic in visual style as anything Doctor Who has attempted.  The Doctor (Matt Smith) has been called to of all places, Skaro, the Daleks' homeworld.  He soon finds it's all a trap, but it is too late and the Daleks have 'acquired' their ultimate nemesis.  We then shift and pick up from the mini-sodes of Pond Life, we find that Amy Pond (Karen Gillan) and Rory Williams (Arthur Darvill) have done the unthinkable: they have divorced.   Rory in fact has brought the divorce papers with him to her modeling shoot, but as soon as she signs "Williams" as her last name, we find that the 'humans' they are interacting with are actually Dalek machines who have acquired Amelia Pond and Rory Williams.

Now we get to the crux of the matter: the three of them have been brought before the Parliament of the Daleks (which begs the question, which ones are Labor and which ones are Tory) for a special task.  The Dalek Prime Minister asks the Doctor to save the Daleks.  Now there's a twist you didn't see coming.

It seems that the Daleks have locked up all their crazy Daleks on this planet, but now there's been a breach, a strange signal coming from this Asylum.  They don't recognize it, but the Doctor does: it's the Habanera from Bizet's Carmen.  We discover that a spaceship has managed to crash there and that there is a survivor: Oswin (Jenna-Louise Coleman), who has been keeping the Daleks at bay for a year.  All the Daleks are too terrified to go to the Asylum, so they opt for the next best thing: send the Predator (a.k.a. the Doctor) and his Companions to disable the protective shield and thus allow the Daleks to blow up the planet.

With that, they literally plunge in.  As is always the case, the trio have to be separated.  Amy and the Doctor fight off the Daleks and the material that can be used by them (living or dead) while Rory struggles to stay alive.  Both groups are guided by Oswin, who now has an offer: she will deactivate the shield but asks that they get her.  The Doctor goes.

The planet is starting to affect Amy in that those without protection will eventually turn into Daleks.  We also learn of the marital strife in the Williamses marriage: Amy can no longer have children, which is what Rory always wanted.  Rather than let him continue suffering, Amy divorced him to free him.  Of course, we all know they love each other, but enough with the marriage issues.

The Doctor finally locates Oswin, but here we get one more big twist: she is no longer herself, literally.  She could not have survived a whole year on the planet and gotten her supply of eggs and milk for the soufflés she constantly tries to make.  She has already been turned into a Dalek.  At first she doesn't believe it, but it all becomes clear that Oswin is no longer human.  She however, has used her mind to hack into the mainframe, erasing all memory of the Predator/Oncoming Storm from the Daleks.  As a result, when after the Daleks blow up the Asylum the Doctor reappears before them.  They, however, have no idea who he is, hence their asking, "Doctor Who?"

The Doctor drops Amy and Rory off at their home, their marriage restored, and the Doctor flies off in his TARDIS, gleefully calling out, "Doctor Who? Doctor Who?  Doctor Who?"

I'll right off the bat say that if it weren't for all the "Doctor Who?" business at the very end, I would have pushed Asylum of the Daleks to a higher score.  I don't find this constant working of the show's title into a pun clever, but irritating.  As the Great Morrissey once said, "That Joke Isn't Funny Anymore."  Truth be told, it wasn't all that funny whenever it was used, but because I still have all those "Doctor Who?" reverberating in my mind from The Wedding of River Song, I am more disinclined to embrace it with the manic glee Steven Moffat does.

Just get it out of your system, Steve.

In terms of story, we get quite a few twists, some that work, some that don't.  One thing that is particularly shocking is that Oswin is a Dalek.  That in an of itself isn't a big shock.  On the contrary it's quite logical.  When the Doctor kept asking where did she get the milk for her soufflés he was doing the Doctor thing of pointing out the obvious while still being opaque.   No one (in particular the ever-dim Rory) would notice the fact that Oswin was suppose to be trapped behind a safe chamber from the Daleks

THE BIG SHOCK is that Oswin will be the newest Companion and will take over the Williamses after their departure.  This isn't a spoiler in that it's been announced that Coleman will become the new Who Companion.  We now, thanks to Moffat, have a giant conundrum: a Companion from the future that we first meet on her DEATH (seeing as she was a converted Dalek she was blown up on the Asylum).  As it was pointed out to me, this is the biggest twist in Who history: in a sense, the Doctor's next Companion is a Dalek.

Now for his next trick, how will someone we already know to be dead be brought back to take her place next to the Doctor aboard the TARDIS?  I don't trust the 'she is someone other than Oswin' vein where it was a double, but if her fate is to be turned into a Dalek, wouldn't she have remembered the Doctor (unless her memory was wiped the same way she wiped it)?

I smell a timey-wimey rationale.

Let's leave that aside for a moment and turn our attention to the Williams subplot.  One could either go forward with the story of the difficulties within the marriage that are tearing them apart or do what Asylum did: resolve it in one quick "I love you, I love you more" moment.  I wonder if in this case, having them work out their issues over the five stories they have left might have been more realistic than having them resolve everything so quickly.  At times, the marital strife between Amy and Rory seems almost an afterthought.

I will say that I have been highly critical of how Doctor Who ignores its history, but I give Asylum credit in the subtle nods to the past (by having all the Daleks in "Intensive Care" be from previous encounters going all the way to The Daleks' Master Plan), even if they are a bit too subtle.  I'll let that go for now, but somehow I still think the whole thing of 'capturing the Doctor to have them do their dirty work' didn't quite ring true.  If they could do that, why didn't they do it early to kill him?

Is is just me, or is the 'grabbing his Companions to help in enter and escape a Death Zone' a bit TOO similar to The Five Doctors?  Just substitute Borusa for the Daleks, and Gallifrey for the Asylum, and isn't it pretty much drawing from the same well?

In any case, let's move on to the positives.  Nick Hurran creates some simply astonishing visual moments: the opening to Asylum where we sweep into a decimated Skaro is breathtaking in its epic scope.  It looks less like a television program than it does an opening to a feature-length film.  Hurran also keeps the fear factor flowing freely (there's some nice alliteration for you) with his great work with the camera movements and lighting.  The sequence where Rory comes across seemingly dead Daleks is quite frightening in its stillness, and only rises when they first start asking for 'eggs'.  Only Rory would fail to realize they are slowly starting to form their battle-cry.

The overall look for Asylum of the Daleks is breathtaking in its scope and the pacing is quite fast, perhaps though a bit too fast.  That is the unfortunate aspect of hour-long stories: we can't really stop to ask a lot, such as why the Daleks would have human doppelgangers to lure the Doctor and his Companions to go to the Asylum.

Wouldn't it have been easier to give the Doctor a reason to go to the Asylum?  Maybe he must be deceived to go rescue Oswin or the Williamses?  Maybe the Williamses now must rescue the Doctor?  Maybe the trio has to escape the planet with the resurrected Daleks fighting the invasion force of other Daleks: another Dalek civil war (of which, curiously, there's been more than one).

I find that the acting in Asylum is far better than we saw from last series/season.  Darvill for once showed that Rory can actually have a bit of a backbone by showing genuine anger at his now ex-wife, even if that was only one brief moment before resorting back to the 'eternally in love wimp'.  Gillan has to draw great anger at herself when explaining why she 'let Rory go', and she did a good job here as the remarkably terrifying moment when she starts to see her past as her mind starts succumbing to the Daleks conversion methods.  Even Smith, who has been one of the worst things in NuWho, manages to tone down the ridiculousness factor and be more the commanding hero of old (even if he can't resist falling into his old tricks of making the Doctor a bit silly by the end).

I didn't warm up to Coleman: struck me as being too River Song-like in her arrogance and how smart and witty she was suppose to be.  Still, she did a good job once she found herself to be a Dalek (a surprisingly effective montage that should send chills up the spine).

Again, on the whole if it weren't for some silly moments (yes, in particular the "Doctor Who? Doctor Who" business which is the current fixation of Moffat's, Asylum of the Daleks is a strong story that has twists that aren't outlandish or preposterous and that is filmed brilliantly, with moments of terror and visual arrest that work excellently within the show.

It remains to be seen whether this is an indication of a turn for the better, or a brief moment of lucidity within Moffat's own madness.

Next Story: Dinosaurs On A Spaceship
Posted by Rick at 1:24 AM