Don't Shoot, I'm NOT The Doctor

Despite what NuWhovians may think this is NOT the first time Doctor Who has visited an American Wild West setting.  I'm NOT, curiously enough, referring to when the Eleventh Doctor was in Utah for Day of the Moon Part 1 (The Impossible Astronaut).  The very first time the Doctor went to the American West with its cowboys and shoot-outs was when the First Doctor visited Tombstone in The Gunfighters.  That story was one of the worst First Doctor stories if not one of the worst Doctor Who stories, period.  A Town Called Mercy, mercifully, is better than The Gunfighters,  Sadly, it isn't much better.

We first encounter a killing machine that has executed an otherworldly being, but he has one more he must execute: one he calls 'The Doctor'.  As it stands, a being called The Doctor (Matt Smith) arrives in this American West town in 1870 (the dialogue mentions it's been five years since the war, which I presume is the 1861-1865 American Civil War).  He was going to take his Companions Amy Pond (Karen Gillan) and Rory Last-Name-To-Be-Determined (Arthur Darvill) to see the Mexican Dia De Los Muertos festival (that's Day of the Dead to you 'gringos', a term which Mexicans don't really use but I digress), but instead they come across this strange town where there's a Keep Out sign and a tiny barrier of rocks and tree stumps.  That doesn't stop our travellers, who amble into the local saloon.

Once The Doctor declares himself to be 'the Doctor' and an alien one at that, the townsfolk grab him and throw him out of town to face The Gunslinger (Andrew Brooke).  He IS the Doctor, and he IS an alien.  However, only one person wont let him get killed: the Marshall, Isaac (Ben Browder).  He forces the town to bring the Doctor back because he (and really, the whole town) knows he's not the man the Gunslinger is after.

That dishonor goes to Kahler-Jex (Adrian Scarsborough), who crashed upon Earth many years ago.  He not only became the town doctor (bringing a cure for cholera that spared the town), but a bit of an engineer (bringing electricity long before Edison came around).  The town, as ungrateful as ever, would have turned him in except for Isaac's intervention (which is why Jex is in the jailhouse now...a little Johnny Cash there for you). The Gunslinger has kept the city under siege: letting nothing in or out until the alien Doctor is turned over.

At first the Doctor is just going to get the TARDIS and whisk everyone out (being able to talk "Horse" makes things easier), but soon we hit a snag.   He finds Jex's spacecraft and learns his terrible secret: he had created the Gunslinger as part of some super-soldier project, but in the process had killed many of his own people to get it right (why do I suddenly recall The Re-Animator).  The Gunslinger now wants justice from this alien doctor.

What to do, what to do?  At first the Doctor uncharacteristically tries to get Kahler-Jex out of town to be executed, but Isaac jumps in, sacrificing his life for Jex's.  The Gunslinger, now furious, gives the Doctor until noon to turn him over, or he kills everyone.

Yep, The Doctor has until High Noon...

The Doctor dissuades the lynch mob who wants to turn Jex over to the Gunslinger, and comes up with a plan to help him escape.  However, while fleeing a town called Mercy, Jex realizes that he cannot run from his own sins, and allows the spacecraft's self-destruct to complete.  The Gunslinger, now without purpose, is persuaded to stay on in Mercy, where the voice-over that introduced the story tells us that ever since then, A Town Called Mercy has never had a sheriff or police, for they have their own angel that fell from the sky...

I think the best way to describe A Town Called Mercy is to say it's Robocop meets High Noon meets Frankenstein with a bit of Blade Runner in the mix.   You have the somewhat mad scientist creating a monster that comes after him, but who now follows him into the Wild West.  Here, the Gunslinger lays siege to the town until he is turned over since the Gunslinger cannot hurt innocents.

However, on second viewing (and in a rare turn, I did watch it twice), there were things that didn't hold up.  IF the Gunslinger knew Kohler-Jex was in Mercy, why didn't he just walk into Mercy and take him out?  There was nothing physical to stop him entering Mercy; on the contrary, it was the Gunslinger who was holding the town hostage.  He would shoot at anyone who tried to get out or in, but nothing as far as I could tell prevented him from just riding into town and taking Jex out. 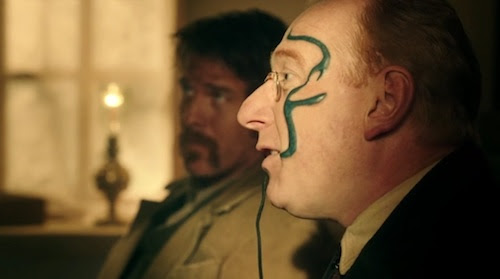 This is especially true given that Jex, like all those from the planet Kahler, have distinct facial markings.  The Gunslinger would have known which citizen of Mercy would have been the one he was looking for.  Perhaps the fact that Mercy had that anachronistic electric lighting system was what kept the Gunslinger out and I missed that part.  However, the whole 'city under siege' business, while interesting, doesn't appear to hold water.

I don't begrudge Toby Whithouse for going for a Western-style story, and he has a lot of the elements there (the shoot-out at high noon, the dusty saloon, the undertaker constantly measuring potential clients).  We also have a shockingly relevant score by Murray Gold that sounds like what it is suppose to be: a rip-off of a Ennio Morricone score for a Sergio Leone spaghetti Western.  It's shocking in that it fits into the cliches of a Western, rather than the same music Gold inserts in every Doctor Who story (I'm personally tired of that loud chorus belting out almost every finale).

On the plus side, we see a genuine performance from Smith.  I confess to thinking he was becoming the worst Doctor but in A Town Called Mercy, he really brings out a surprisingly dark and dangerous side to the Doctor: a man who has run out of mercy (how clever...) and will not shrink from tossing the intergalactic version of Dr. Mengele out to get his just desserts.  However, it is Gillan's Amy that brings him back to a sense of mercy (and Isaac's sacrifice just adds to the equation).

That middle section when the Doctor shouts out his desire to see Jex killed (even pulling a gun on him and the townfolks) got me almost to push A Town Called Mercy up in score, and I struggled a bit to keep it there.  Here is where I part company with the prevailing winds that have declared A Town Caleld Mercy to a great episode.

Again and again, there simply was too much comedy that undercut whatever serious themes the story wanted to tackle.  You can't have someone stride up to the bar and ask for 'tea', adding that it had to be the strong stuff ("leave the bag in", I remember the Doctor saying).  Add the business of teh Doctor getting his toothpick stuck in his mouth and you wonder where this is all going.

The business about the Doctor 'talking horse'?  Takes away from anything good.

Amy doing the cliched thing about accidently shooting off the gun...TWICE?  Takes away from anything good.  Personally, I would have liked it if Amy had shot Rory...given him another chance to die.  Also, did anyone think it is a cliche to see the girl can't handle her pistol?

The little girl knocking over something that alerts the gunman that there are people there?  Takes away from anything good.

Not even obliquely referencing The Gunfighters?  Bad, bad, bad, but typical of our NuWho policy of ignoring almost everything pre-Rose.  In The Fires of Pompeii, at least there was a subtle reference to The Romans, but here, they opted to ignore the past.  I bet there will be more than a few NuWhovians who think this is the FIRST time the Doctor's been to the Wild West.  Yet I digress.

Somehow, despite all evidence to the contrary, there is nothing shocking about Jex turning out to be a shady character.  In fact, I was expecting it to give me that twist because then A Town Called Mercy would have been more straighforward without the questions of morality that it asks.  Who is the real villain: Jex for having created the Gunslinger or the Gunslinger for laying siege to the town and wanting to kill Jex sans trial?

I think a big flaw within A Town Called Mercy is that it all but sidelines the Ponds/Williamses.  Rory in particular has very little to nothing to do with the story, and while Amy is there to be the Doctor's conscious that role could easily have been filled by Isaac.  In a curious turn, a program that has become more Companion-centered than Doctor-centered didn't even NEED Companions.

Speaking of, am I the only one who thinks Isaac, like Riddell and Queen Nefertiti from Dinosaurs on a Spaceship would have made a great Companion?   Again we have the opportunity to have a great clash between a man of the Golden West and an alien from the far future, and again, we kill off one of the best characters in the episode.  Browder did a great job as the morally upright Marshall who will stay loyal to his friend, Doc Jex, the man who did good work in Mercy regardless of his past.  Perhaps if A Town Called Mercy explored more of his time as a Civil War veteran we could have delved more into Isaac's unwavering loyalty, but once again we have to kill someone to make a point.

I DO wish that the NuWho team would open their minds to having Companions from another time, place or world.

I don't think A Town Called Mercy will rank among the greats because all the comedy bits (which fell flat anyway and were predictable) took away from a surprisingly good opportunity to explore the effect these heady matters of life and death have taken on The Doctor.  While Smith had one good and brief shining moment in the middle of the story, everything else was typical Matt Smith: goofy, silly, and completely dumb.

Sorry Doc, but this town ain't big enough for the two of us...

Next Story: The Power of Three
Posted by Rick at 8:13 PM