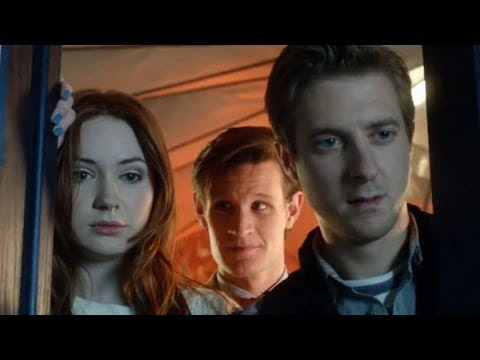 For better or worse we now have shifted the focus on Doctor Who from the Doctor himself to the private lives of his Companions.  Normally, I don't care about these little mini-sodes used as teasers for the upcoming season, but Pond Life was different.  Why was it different?

I think it boils down to one thing: it seems to inadvertently capture everything wrong with Doctor Who today: idiotic comedy, focus away from the central character, and near-obsession with weak characters and inept points of logic.

Let's just get this out of the way: Pond Life is a misnomer.  There is no such thing as Pond Life.  If one wanted to have a little thing about Pond life, we would have to talk about Amy's parents.  That's because THEY are the real Mr. and Mrs. Pond.  Amelia is a Pond, but damn it, Rory isn't a Pond and he never will be a Pond.

Rory is a Williams.  He was born a Williams and should he ever die and stay dead, he will be marked as Rory Williams, not Rory Pond.  It is a sign of the stupidity of NuWho fans that they constantly refer to them as "the Ponds" when that name belongs only to Amy, not Rory.  It's just a little thing for me to see a character so dismissed that his name isn't used.  Yet, I digress.

On Pond Life, the total running time if put together is about six minutes, we have a brief moment in the course of five months (April through August) where we catch up on our Companions Amy Pond (Karen Gillan) and Rory Name-To-Be-Determined (Arthur Darvill) as to what they do when the Doctor's away.

April: they get a call from The Doctor (Matt Smith) telling him what he's been up to (such as meeting Mata Hari in a Paris hotel room, apparently for marshmallows) and 'laying some backing vocals' on a rap song.  WHY?  Because someone thought it was funny.

May: the Doctor barges into their bedroom, warning them of impending danger...except he's come too early without telling them anything.

June: they wake up to find an Ood in the loo.

July: The Doctor tells them the Ood accidentally wandered off from the TARDIS, and the Whatever-They're-Called are a bit non-plussed to find the Ood serving as their housekeeper (doing the laundry, making the beds, fixing breakfast).

August: The Doctor calls in, but alas, Rory has left home.

I think it's this radical shift from the lightness of the first four episodes to the remarkably dark tone of the last that makes Chris Chibnall's writing so odd to say the least.  Every mini-sode prior to August was light, almost idiotically so (nearly a whole minute to set up an 'ood on the loo' joke), that when we do see something apparently tragic (complete with black-and-white footage), it almost seems to come from another story altogether.

It's this reliance on comedy that kills Pond Life completely.  I lose respect for a show that isn't willing to take its characters seriously and instead wants me to laugh at them.  Episode One does that.

Backing vocals?  Seriously? Did a five-year-old find that amusing?  Judging from the looks of it, the Doctor's never seen a naked lady before (and if we go by River Song, perhaps he'd never want to see another naked woman, but I digress).  As if that isn't already bad enough, all the dancing and the backward-baseball cap just sunk the whole thing down.

It's a Series of Uninteresting Events, playing to Smith's manic interpretation of the Doctor as this being who seems completely out of touch with reality.  He isn't aware of women's bodies, or that breaking into people's bedrooms only to leave them uninformed is both vulgar and rude.  There is, curiously enough, something egocentric in the Doctor.  He appears to think the Pond/Williamses are just waiting around for him to pop in and he seems genuinely surprised that they aren't there when he rings their doorbell.

Yes, the Doctor has always been a bit self-centered, but not to this degree.

Ultimately, Pond Life says nothing about the story of Amy and Rory and it doesn't put the Doctor in a good light.  Really, this Pond should be drained.