Doctor Who Story 048: The Seeds of Death 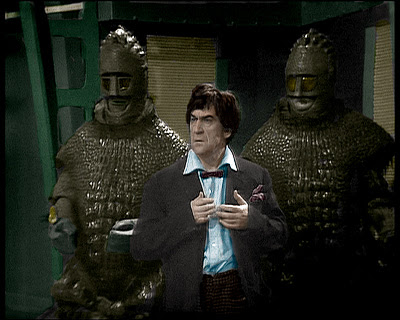 The Ice Warriors are not familiar to many Doctor Who fans. I imagine perhaps even those who followed the Classic series may not have seen the stories that featured our literal 'beings from Mars'.  They only appeared in four Who stories (The Ice Warriors, The Seeds of Death, and the two Peladon stories: The Curse of Peladon and its sequel, The Monster of Peladon...the latter being a rare sequel in Classic Who).  Since then, the Ice Warriors have been absent from Doctor Who and have yet to appear in the NuWho.  That is a real shame, because the Ice Warriors were quite effective in the fright department, and their second story, The Seeds of Death, is a simply brilliant story: cinematic in scope, with great performances, climatic cliffhangers, and an intelligent script.

The Earth has come to rely on T-Mat, a method of sending people and materials virtually instantaneously from one point to another by using the Moon as a relay point.  You could send food or yourself from New York to Canberra within seconds.  However, there is something evil afoot: the Moonbase (not to be confused with an earlier Second Doctor story called The Moonbase) is now been taken over by a mysterious force, and it isn't until near the end of Episode One that we discover it is the Ice Warriors.

Meanwhile, back on Earth, T-Mat's inexplicable failure is frustrating its engineers, in particular the T-Mat Controller and second-in-command Gia Kelly (Louise Pajo), who is both extremely efficient and extremely irritated that anything could have gone wrong.  However, no one could foresee that the Moonbase was now in enemy hands.  The Ice Warrior's leader Slaar (Alan Bennion) has either killed or forced the crew to do his work.  One, Phipps (Christopher Coll) has managed to escape the Ice Warriors, while Fewshan (Terry Scully) has become their terrified accomplice in betraying the planet.

Due to T-Mat's popularity with governments, there is no alternative method of reaching the Moonbase as the crisis grows, that is except for one.  Old Professor Eldred (Phillip Ray), who now runs a private Space Museum, is the only one who has both the knowledge and the machinery to launch a rocket (which by this time is seen as obsolete).  The professor, who is bitter over having his rockets replaced by T-Mat, at first refuses to help, but is persuaded to do so, thanks to three people who happened to have entered his museum.

The Doctor (Patrick Troughton) and his Companions Zoe (Wendy Padbury) and Jamie (Frazer Hines) soon undertake the dangerous mission to the Moon to both find what's going on.  While they're in space, Fewsham has repaired T-Mat, but it's just a way to lure Controller Kelly to the Moon.  Now the nefarious plot thickens.

The Ice Warriors have decided to launch an invasion of Earth using T-Mat to transport their seeds to the planet.  These seeds will have two effects: it will reduce the oxygen levels (killing off the humans) and make the planet hospitable for their own species (they cannot stand heat being from the cold planet).  The Doctor, after recovering from an exploding seed of death, manages to return to Earth.  Unfortunately, so has an Ice Warrior, who is now on the rampage, with the seeds killing everything that comes their way.  The Doctor discovers a way to defeat the seeds, and the invasion is misdirected to approach the Sun (killing the invasion fleet).  With Slaar the only survivor of the Ice Warriors' invasion force, the heat on the Moonbase kills him, and the travellers escape unnoticed.

As I watched The Seeds of Death, I could not help marvelling at what a well-paced, well-acted, and beautifully-photographed story it was.  I have found that very few four-episode plus stories work.  They tend, with the exception of Dalek stories, to feel stretched out.  Even the previous story, while brilliant, felt one episode too long.  Not so The Seeds of Death.  At six episodes the story never felt either rushed or padded.  This is due to two factors: the script and the directing.

In regards to the latter, extraordinary credit should be given to Michael Ferguson.  The visual style of Seeds of Death is extraordinary.  He created a look that was almost cinematic and that stand up against almost anything NuWho has come up with.  There is a great visual flair in the story, starting from Episode One when we get the point-of-view (or POV) of the monsters.  The decision to withhold the reveal of the villains until the end of the episode was a brilliant one.  Again and again Seeds of Death has a great visual style that reflects an ambition that pushes the story to new heights, in particular in the Second Doctor's era.  Each episode has an arresting moment of beauty, from overhead shots of the Ice Warrior looking through a storage room for Phipps to when Slaar confronts Fewsham before a lighted screen to when Zoe and Jamie are avoiding another Ice Warrior at the Weather Control Center.  Rarely has a Doctor Who story been so cinematically shot to where it would be beautiful just to look at.

However, The Seeds of Death also has brilliant performances.  Pajo is brilliant as the ever-efficient, ever-professional Kelly, someone who wants to be appreciated for her accomplishments, not dismissed for being a woman.  It's a credit to her acting talent that before the end of Episode One she is not thought of as a beautiful and bright woman but as a bright, even strong person.  I'm glad the story suggests the sexism she must endure (in Episode One her superior compliments her on her talent and beauty, which she chooses to simply ignore).  Scully's Fewsham is equally brilliant as this frightened and cowardly man who might not want to work for the Ice Warriors but who is too scared of dying to fight them.  That doesn't mean that when he does finally have a moment of courage and sacrifice himself for the planet, it doesn't move one emotionally.  Despite all the evil he did, I empathized with him and felt genuine sadness at his end.

In a smaller role, Coll's Phipps played his part beautifully: a bright but frightened man, doing what he can to survive but knowing he is great peril.  Same goes for Ray's Professor Eldred, who is both bitter and pleased that his rockets are now being embraced rather than dismissed.  None of the guest stars faltered in their characters, whether courageous or cowardly, whether fearful or forceful.

Going on to the leads, I don't think the leads have had a finer hour acting-wise.  Troughton shows his Doctor to be both serious and comical (who wouldn't at least smile as he flusters his way out of the attacking foam) and Hines' Jamie also shows that he is fiercely loyal and protective for him and Zoe.  However, it is Padbury that clearly runs away with it.  She never makes Zoe's superior intelligence something to dislike in her because she always mixes her smarts with a sweetness that shows she's not being bossy, just brainy.  However, the cliffhanger at Episode Five is where Padbury excels.

She has been caught by the Ice Warrior in front of the screen after she manages to start raising the temperature and is facing certain death, with only Fewsham in any position to help her.  She screams in total terror for him to help her, this man she doesn't really know and whom we know has never helped anyone else save their lives.  The abject horror and terror she displays (even as her face is partially obscured by the lights, with only her voice to project the emotions) is a chilling and terrifying moment.

In regards to the second thing that makes The Seeds of Death simply brilliant, while the credit is given to Brian Hayles,  script editor Terrance Dicks also wrote part of the story (uncredited).  Whoever ultimately put Seeds of Death together, each episode ended brilliantly.  Besides the aforementioned Episode Five cliffhanger (truly one of the best in the series, perhaps in all of Doctor Who--Classic and NuWho), each cliffhanger does make one wonder, 'what's going to happen next?'  Even the opening to each episode, with the beautiful shots of the Earth and the Moon accompanied by Dudley Simpson's incidental music, had us in suspense (and again were beautifully photographed and edited).

I also think that the special effects still hold up remarkably well given the story is pushing fifty years.  Granted they might look not as sharp as things today, but whenever the Ice Warriors kill someone the visuals and music are shocking and so excellently put together.

I will be a bit nit picky by pointing out one or two things that didn't quite hold.  I wondered exactly how it was possible that the Ice Warriors didn't notice the rocket landing at the Moonbase.  We also have a bit of running down corridors, something that would soon become, excuse the pun, a running gag on Doctor Who.  In fact, I wondered whether that whole concept started in The Seeds of Death.

Finally, let me address one of the most notorious moments in Seeds of Death.  When the Doctor manages to escape into the Weather Center he slips from all the foam.   Poor Wendy Padbury plainly starts laughing and while she continues the scene to its conclusion one can clearly see the smile on her face and the desperate efforts to control her laughter.  In this case, I'm cutting Padbury some slack since I doubt anyone would have been able to control themselves, and actually Padbury did better because she didn't draw attention to her reaction.

Overall I found The Seeds of Death far more thrilling than I thought I would.  The pacing is brilliant, the acting is superb, the story holds your interest, the monsters effective, the visuals are stunning.  Given that there are only two stories left in the Second Doctor's tenure, it is hard to believe that they could come close to topping The Seeds of Death. 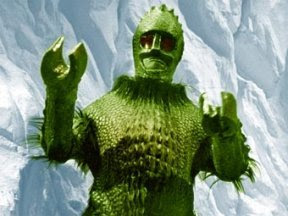 I'd be excited if they were to return to Doctor Who, but then I remember they'd be coming back to this...

Next Story: The Space Pirates
Posted by Rick at 1:30 AM