Doctor Who Story 046: The Invasion 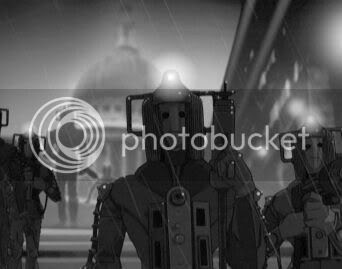 Who Knew Cybermen Were So Animated?

In The Invasion, we have a bit of a conundrum.  Episodes One and Four of the eight-part story are currently missing.  However, it has been released on DVD intact.  How is this possible?  Animation my friends, and what animation we have.  Somehow, the animated episodes not only work well within the story, they actually enhance it, making it more brilliant.  However, more on that later.  The Invasion brings back the Cybermen in perhaps one of their biggest stories of the Classic Era.   While the length of The Invasion may be a bit too much for the story to hold, on the whole The Invasion pushes Doctor Who to a higher level in almost all departments.

After having the TARDIS restored at the end of The Mind Robber, the Doctor (Patrick Troughton) and his Companions Jamie (Frazer Hines) and Zoe (Wendy Padbury) narrowly escape a rocket launched at them from the Dark Side of the Moon.  They find they have materialized on present (read 1960s) Earth.  Quickly the three are wrapped in a mystery: there's shady and nefarious goings-on involving International Electromatics, a giant conglomerate headed up by the mysterious Tobias Vaughn (Kevin Stoney).

Soon, we learn Vaughn's scheme: to help the Cybermen invade and conquer Earth!

However, Vaughn has a few tricks up his sleeve.  Ostensibly helping the Cybermen, he really will use them to become sole ruler of Earth.  He has forced scientist Professor Watkins (Edward Burham) to modify a device the good Professor had created.  Originally to help enhance education, Vaughn has it altered to enduce emotion, which would render the Cybermen powerless to him.

While the Doctor eventually uncovers both Vaughn's scheme and the Cybermen connection, he gets help from an old friend.  Colonel Lethbridge-Stewart (Nicholas Courtney) from The Web of Fear, now upgraded to Brigadier, has also been investigating International Electromatics, heading up a new organization called UNIT: United Nations International Taskforce.

Eventually, the Cybermen do invade, and with the combined efforts of UNIT and the Doctor & Friends (including Professor Watkins' niece Isabel, played by Sally Faulker), they and their ally Vaughn (who when learning the Cybermen will not make him Earth's ruler turns against them, giving his life in the struggle), they Cybermen are defeated.

Again, I should point out that The Invasion at eight episodes is a very long story, and I think an episode too long.  At Episode Eight we are introduced to some sort of Doomsday Bomb that will destroy Earth should the actual invasion be a bust.  Perhaps I was distracted but I don't remember that ever coming up in the discussions, and to my mind it seemed like Derrick Sherwin had to throw in one last thing to justify there being at least one more hurdle to overcome.

To my mind it seems once the Cybermen are actually defeated, throwing in this last-minute danger from almost out of nowhere is almost superfluous.

However, this last-minute action is only a slight flaw in a brilliant story.  The Invasion is an important Doctor Who story in many ways.  First, it introduces a long-standing group that will be vital as the series continues: UNIT.  As the show would expand, UNIT's role would also grow.  The Invasion therefore is the first to feature not just UNIT, but the character of The Brigadier, who would go on to become a true Doctor Who Icon (as opposed to that horrid rammed-in character of River Song).

Speaking of River, The Invasion is a textbook example of how to integrate characters from other stories right.  In the school of 'everything old is new again', we see that Classic Who, at least during the first six seasons, did what NuWho is doing now: it has characters making return appearances.  Take Professor Travers, who appeared in The Abominable Snowmen and The Web of Fear (the two Yeti stories).  He was scheduled to return again in The Invasion, but Jack Watling proved unavailable, hence the new character of Professor Watkins (although it's clear that Professor Travers was suppose to appear, given the Doctor & Companions went looking for him).   The Invasion also brings back Lethbridge-Stewart from The Web of Fear.

Note that in each case, there was a logical reason to bring back the characters.  Travers/Watkins were scientists who had expertise in the plot, and Lethbridge-Stewart provided the military muscle to take on the threats.  NuWho unfortunately gets wrapped up in its own newly-created mythology by bringing back characters (like Winston Churchill and especially River) and throwing them into the story whether their appearance makes sense or not or are even necessary.  It also wraps the episodes together, rather than have the individual stories tie in with a character or two.  The Invasion has characters we've already seen, but it stands on its own.  In other words, one doesn't have to have seen The Web of Fear to follow The Invasion.

This can't be said of NuWho, where if you watch The Angels Take Manhattan first you might be puzzled as to who the central character is or River's relationship with anything involving the plot.  If you next watch River's Secret Parts 1 & 2 (A Good Man Goes to War/Let's Kill Hitler), it becomes more confusing, let alone if you catch any other River-centric episodes (of which I'd argue there are far too many).  Classic Who had references and characters from previous stories, but they were integrated into the new stories and didn't have to have watched the first story because it was independent from the second.  NuWho at times becomes one long story with several episodes rather than various independent stories that it becomes convoluted.

Yet I digress.  The Invasion is brilliantly acted, in particular by Stoney's Vaughn, who keeps a mostly calm and chilling portrayal of a brilliant and evil genius. Stoney had a delightfully wicked manner to him, in particular whenever he said, "Packer" (Peter Halliday) when calling his dim-witted muscle or taking him to task whenever Packer bumbles his tasks (which is quite often, so much so one wonders why Vaughn didn't just shoot him).  When Stoney does rage, it becomes more terrifying because he keeps so calm, almost delightful, in his manner that when he does break it becomes full-on fury.

Even when he changes sides to help the Doctor, it wasn't any appeal to his humanity (given he was part-Cyberman himself, a brilliant and shocking turn), but because of his own megalomaniac motives.  It was a bright idea to not make Vaughn a sympathetic character but to keep him basically evil but who joins the Doctor's fight in the last minute for logical reasons.

Faulkner's Isobel is a great guest star, and it's nice to see Zoe get a girlfriend with whom to interact.  Isobel is not a damsel in distress (most of the time), and in fact she too earns points for being the first woman to tell the Brigadier he is a male chauvinist pig (which he was).  However, she also brought some well-needed lightness to her fun-loving Swingin' Sixties Girl, in particular with her flirtations with Captain Turner (Robert Sideway), whom she called Jimmy.

The Invasion is probably one of Troughton and Hines' finest hours as the perfect Double-Act of Doctor and Companion.  Individually they were great (Troughton's comic moments seemed perfect for his Doctor, while Hines' more man of action fit in with the story), but together they had a great rhythm to where they created moments of adventure and comedy throughout the story.  Padbury's Zoe was one who knew she was brighter than everyone around but she wasn't arrogant, but rather endearing, even childishly determined (as when she would not be defeated by a computer).

One thing that needs commenting on is Don Harper's score.  At times, the music is quite cinematic, almost sounding like a gangster-film score enhancing the tension.  The cinematography is likewise brilliant.  Douglas Camfield put all these elements together in a masterful way to where The Invasion plays like a feature film.

In particular are the actual scenes of invasion.  The quick cutting of the population coming across the Cyber Army and the scenes of the Cybermen marching in front of St. Paul's Cathedral is terrifying and brilliant.

Finally, let's move on to the animated Episodes One and Four.  Truth be told, The Invasion is so good that one doesn't even notice when it goes to an animated form.  The animated episodes themselves are so well rendered that the revelation of the Cybermen in Episode Four is actually more terrifying in the reconstruction than in the recap in Episode Five.  The animation is beautifully rendered and makes one wonder whether the other lost stories like The Evil of the Daleks or The Myth Makers couldn't be brought back with animation.

If it weren't for the Doomsday Bomb at the last minute The Invasion would probably be perfect.  Still, the fast pacing, the brilliant acting, the moments of comedy (such as when the Doctor stops to pose for Isobel's picture while everyone else goes after the Cyber Army) and the smooth integration of UNIT and the Brigadier into the Doctor Who mythos: it all works; this is one of the best Second Doctor stories available, even with the missing episodes that with the animation isn't incomplete anymore.

Next Story: The Krotons
Posted by Rick at 8:30 AM