Doctor Who Story 047: The Krotons 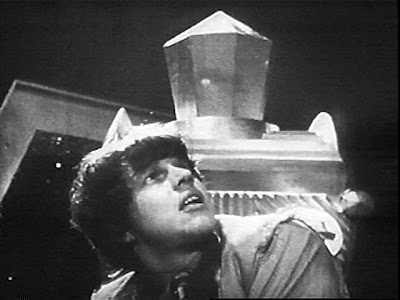 The Krotons is not held in high regard by Doctor Who fans, primarily because of the title characters themselves, who are seen as terrible monsters/robots.  However, after watching The Krotons for the first time, I think that this is a case of failing to see the forest for the trees.  The Krotons is the first Doctor Who story written by Robert Holmes, who was to become a true Who Icon, creating some of the most legendary Doctor Who stories of all time.  I'll grant that the actual Krotons themselves were pretty weak, but the story itself is overflowing with innovative ideas that should merit reexamination and reevaluation.

The Doctor (Patrick Troughton) and his Companions Jamie (Frazer Hines) and Zoe (Wendy Padbury) have landed on an unknown planet.  No sooner have they landed than they find themselves involved in the affairs of the planet itself.  The Gonds, the humanoids on the planet, have for a thousand years given their brightest young people to "join the Krotons", their benevolent dictators.  No one has ever seen the Krotons themselves, and the young people given to join them are never seen or heard from again.  To join the Krotons is seen as a great honor, but one of the Gonds, Thara (Gilbert Wynne), angrily questions why they have to go.  His motives are more personal: his beloved Vana (Madeliene Mills) has been selected.  He urges revolution, but the Gonds won't rebel.

Of course, we already know what happens to 'the chosen ones': the emerge onto the wasteland and are promptly evaporated.  The space travellers, having landed on the wasteland, find that a man has already been vaporized and that fate awaits Vana.  She is rescued in time but her mind is terribly affected.

Now with Thara outraged, there are rumblings of revolution, then outright attacks on the Learning Hall.  Here, the machines the Krotons provided long ago have not only given them what little knowledge they have, but have allowed the Krotons to find the Gonds' best and brightest.  This mini-Gond Spring raises the ire of the Krotons, who demand they stop.  The Doctor and Zoe, geniuses both, soon become the Krotons' ultimate targets.  Zoe, due to naivete, takes to the machines and is selected.  The Doctor then must take the tests and be selected himself.

They are submitted to the tests but manage to escape.  A concerned Jamie goes after them, but the Krotons quickly realize he is not a "high-mind".  Soon, the Gonds are split: some like Eelek (Philip Madoc) are for full revolution, while their leader and Thara's father Selris (James Copeland) urge that they must acquire knowledge if they are to defeat the Krotons.

We discover that the Krotons nefarious plans: they need the Gonds' intelligence to keep them functioning.  Once they take their intelligence, the selected Gonds are eliminated.  With the Doctor and Zoe, they now have the ultimate ability to leave the planet.  Eelek (Philip Madoc) who has lead a virtual coup, cuts a deal with them: in exchange for leaving the planet, he will hand over the two "high-brains".   The Doctor is able to deduce that the Krotons can be destroyed with sulphuric acid.  The Krotons are defeated and the Travellers slip silently away, off to a new adventure. 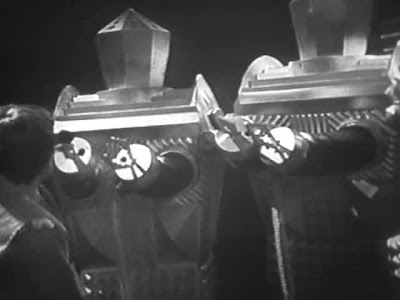 There is no getting around it: the actual Krotons are junk.  Terrance Dicks (a Doctor Who legend himself who served as the script editor) always commented that while the Krotons looked menacing they couldn't do anything: not walk, not attack, not really useful.  Frazer Hines himself said that the Krotons were probably the worst or weakest monsters in his tenure.  There's no doubt that the Krotons themselves appear to be the poor cousins of the Daleks, closer to the Quarks from The Dominators than anything else.  HOWEVER, this is not Holmes' fault, or even that of director David Maloney.

As hard as it may be, I would ask people to ignore the actual Krotons of The Krotons and instead focus on the story itself, which is both inventive and a throwback to other legendary tales.  While watching the first few minutes (which focus on the selecting of the two youngsters to join the Krotons), I couldn't help but think on H.G. Wells' The Time Machine with the Eloi willingly going to serve the Morlocks.  I also had a quick flashback to The Hunger Games, where we again face a situation where a society must send two people (apparently but not specifically a male and female) to be sacrificed as payment for a failed war.

I was expecting a disaster while watching The Krotons given its relatively poor reputation, but what I found on the whole was an exciting and well-thought story that mostly overcomes the titular monster's weakness.  Maloney's pacing is incredible: moving quickly from one point to another while at times being almost experimental.  The scene where Zoe and the Doctor are being tortured with brain drain, visually speaking, is almost psychedelic.  The themes of free will vs. predestination expressed by Selris' desire to keep things as they are conflicting with Thara's questioning of the status quo can be seen as symbolic of how often things stay stagnant because 'that's the way they've always been'.  Youth, however, is both being sacrificed to maintain the old order (any hints of Vietnam?) and also the ones that finally rebel against the system.

Yes, I may be reading too much into things, but I think that Holmes' story is deeper, richer, and smarter than it has been credited.  Selris comments when learning of Eelek's plan to attack the Krotons head-on,


"It is not patriotism to lead people into a war they cannot win."

I find that line to be remarkably insightful into modern conflicts, from Hitler's mad idea that he could fight a war on two fronts to Syria's Bashar Assad's determination to remain in power even if it means wiping his own people out of existence.

Holmes, along with Maloney and the leads, deserve credit for also putting in moments of comedy in The Krotons and throwing in some surprises.  A surprise in The Krotons is when the Doctor asks ZOE rather than Jamie to accompany him to the Learning Hall.  The subtle message is clear: it's going to be brains, not brawn, that will defeat the Krotons.  This decision also allows Padbury and Troughton to work as a double-act, something that previous Who stories have not allowed given the wonderful chemistry between Hines and Troughton.   We have comic moments in especially tense situations, as when Zoe and the Doctor appear to argue as to who stands where just before their brains are to be absorbed by the Krotons or when the Doctor finds the Learning Machine more difficult than Zoe did.

The interaction between Padbury and Troughton is brilliant, and high praise goes to the former.  In other hands Zoe's high intelligence could have come off as bratty or arrogant, but she manages to make Zoe more innocent about how her high intelligence might be off-putting.  As far as she knows, she just is intelligent, but her nature isn't one that lords it over everyone, even someone like the simple Highlander Jamie.

Of course, that isn't to say Hines and Troughton still can't get in some funny bits between themselves.  For example, when Jamie is caught beneath the door and the Doctor and Zoe are pulling him out before they can be vaporized, the Doctor can be heard shouting, "Jamie, you're getting fat!" Take a look at this exchange between Jamie and the Doctor when Jamie emerges from the Krotons' cell:


The Krotons has suffered because the actual Krotons are terrible. However, this is a case of throwing out the baby with the bathwater.  Apart from the actual Krotons themselves, The Krotons is a much more complex and richer story than its been given credit for.  I for one am starting a reevaluation of the story, focusing on the acting and story as opposed to weak monsters.  If one turns away from the Krotons, one finds much to appreciate in The Krotons.

Next Story: The Seeds of Death
Posted by Rick at 11:51 PM