The Wooden Figures of The Doctor 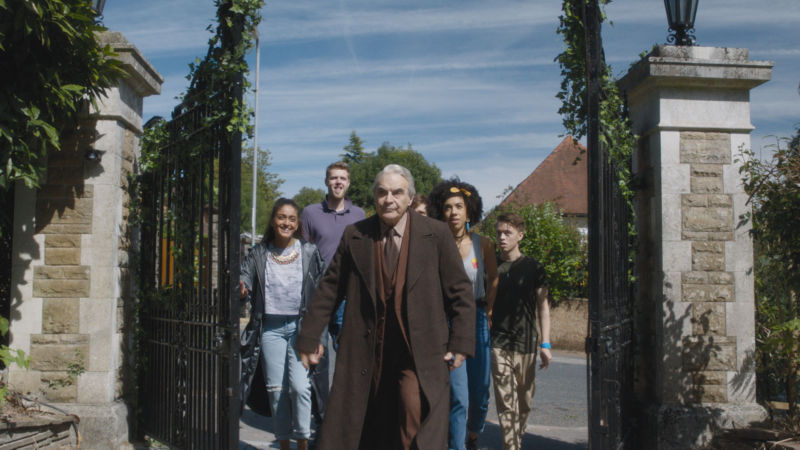 Knock Knock, at its core, is about accepting death and change.  If it weren't for some odd bits of logic lapses, it would be among the best 12th Doctor stories.  As it is, it is still quite good, helped by a strong turn by David Suchet.

Bill Potts (Pearl Mackie) finds that she wants to live a more independent life.  As such, she joins five other college-age people in search of suitable digs.  Nothing comes their way until a mysterious figure (Suchet) comes along, offering a large mansion, complete with tower, for a ridiculously low rent.

These kids, being kids, immediately sign and move in.  The Doctor (Peter Capaldi) comes along and immediately suspects something is amiss.  Bill insists there is nothing supernatural or otherworldly about finding a very large house to let with a very creepy Landlord for a very low price.  Not even the fact the house doesn't get Wi-Fi seem to be a bother.  As far as Bill's concerned, things couldn't be better.

Caveat Emptor, says I, for soon things begin to go bump in the night.  It looks like all the flatmates are disappearing into the house itself, and the house is devouring them one by one.  The Landlord essentially confirms this, as does the presence of alien bugs that live in the wood and eat them one by one.

The Doctor discovers that every twenty years starting from 1957, a group of six tenants comes along and disappear, and now it is 2017's turn to be sacrificed.  The Landlord insists this has to be done to keep his daughter alive.  The Doctor convinces the Landlord to let him look in on the patient.

The patient, Eliza (Mariah Gale), we find is actually not the Landlord's daughter.  It's actually his mother, whom he has kept alive since 1947, when as a child he brought the bugs, unaware of their power.  He soon found that they preserved his mother in wood, and thus he has been luring people to their doom.  The Doctor triggers Eliza's memories, and she and The Landlord soon are consumed by the bugs, for it is both wrong and their time to go.

This releases all of the 2017 flatmates and they escape.  We end with Nardole (Matt Lucas) leaving his shift at The Vault with the Doctor coming into it, offering 'whatever is inside' dinner while listening to the prisoner play a piano. 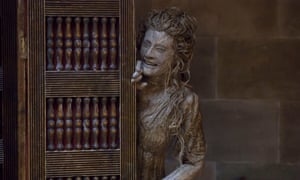 Alas, my enjoyment of Knock Knock gets knocked down if you take the time to think on the odd turns of logic within it.

These disappearances, taking place every twenty years, were never investigated?  In 1957, or 1977, or 1997, no one ever checked on the six people devoured by the Landlord's mansion?

I figure they had families and friends, but apparently no one ever bothered with them, seeing that the police never connected the fact that all six were last seen having one thing in common: the Landlord's house.

Is it a little convenient that Eliza would forget that she was the Mother and not the Daughter?  Did she ever question why she was made of wood, or did she not notice?

She had been dying since 1947, so what exactly did she do for 70 years?  Seems a rather dull life just being locked away all that time (not even a television set to entertain old Mother Wood).

What exactly did the Landlord expect to do when he died (which as far as I know, the bugs weren't about to preserve him, at least not in human form)?  As a side note, he pretty much seems to have wasted his life preserving dear old Mummy, though to be fair, Knock Knock brought to mind a friend of mine.

He'll be 56 this June and he still grieves his mother who died last year.  He lived with her his whole life, has never married or had children, and recently said that it might take him the rest of his life to overcome her death.  My view is that this is unhealthy for him, and that such postmortem devotion veers close to obsession.  My friend, like The Landlord, might have taken this bizarre step from ever seeing his mother die, but it seems almost cruel to keep her in this form.

Between 1947 and 1957, when the first sacrifices were made, who raised him?  If he had a father or even another relative (aunts/uncles, siblings, cousins), that might have kept the grief down.  It's not as if he could be literally left an orphan without anyone noticing.

An excuse used to not notice the absence of one of the flatmates, Pavel (Bart Suavek) is that whenever he moves somewhere new, he locks himself in his room for days on end.  Aside from this being really weird (doesn't go for food or the restroom), the flatmates don't seem bothered or notice that his record player is stuck in a groove for hours.  That excuse is a pretty weak one to explain away his disappearance.

Yes, Knock Knock does leave a lot of questions that on examination, either need a great deal of explanation or don't hold up.  There is another aspect of Knock Knock that disturbed me greatly, more than any plot holes of leaps of logic.

I get that Knock Knock is meant to be creepy, even downright scary.  However, I wonder if it is too scary for children, too graphic in what we're presented.  Seeing Pavel caught up in the wooden wall is downright grotesque, an image that I found highly disturbing.  I imagine children might have been downright terrified at the image.  The sight of the bugs devouring the others was also perhaps a bit much.

Those two images, I think, might have been pulled back or altered, as I found them more graphic than necessary, especially for children.

Again, if one gets past the various points of logic or the somewhat gruesome aspects of Knock Knock, the episode can be seen as a positive.  At the very top of the list of positives is David Suchet's performance.  Suchet is one of the best actors of his generation, and to many (including myself), he's the definitive Hercule Poirot (sorry, Albert, Peter, and soon enough, Kenneth).   He makes the Landlord creepy but also sad whenever the plot requires him to be.

Mackie and Capaldi have proven to be a great fit as Companion and Doctor respectively.  More than smart-alecky Clara, who was at times insufferable, Mackie's Bill is fun, smart without being a know-it-all, and comfortable in her own skin.  Her gentle way of telling one of the guys who fancied her that she couldn't fancy him was handled well without making a big spectacle of her "I'm GAY!" reality.  Their interplay when she attempts to pass The Doctor off as her 'Grandfather' (to the irritation of the Doctor, who wouldn't have objected to "Father") is funny without being ridiculous.

Apart from certain points of logic, a more graphic set of visuals, and the tired 'everyone lives' trope, Knock Knock displays far more positives than negatives.  A great performance by David Suchet, great work by Mackie and Capaldi, a strong sense of the creepy old house: all worked together well.  It might have been better if Knock Knock had been a two part story to allow for a less rushed feel, but on the whole it is a step above what we've seen before.

I thought long and hard about my ultimate feeling for Knock Knock.  I was disturbed by the graphic nature of some of it, and question a lot of the logic behind it.  However, with some work this season of Doctor Who has proven so far to be a much better, much stronger one.