The Hysterical Blindness of The Doctor

As this is the second part of The Monks Trilogy, the three will be judged with one grade.  However, I think The Pyramid at the End of the World is a surprisingly strong episode, packing in its hour running time a lot of thrills, chills, heart and leaving with an interesting cliffhanger.

Whether said cliffhanger will have a positive resolution is yet to be seen.

The Doctor (Peter Capaldi) despite all logic, is still able to disguise his blindness from everyone.  Only Nardole (Matt Lucas) is privy to his secret.  It again comes at the worst time since the United Nations is calling upon The President of Earth for help.  In far-off Turmezistan, an ancient pyramid has just popped out of nowhere, and is between three large armies (the Americans, the Chinese, and the Russians). This is an emergency, so much so that it requires Bill Potts (Pearl Mackie) to have her real date with Penny (Ronke Adekoluejo) interrupted again!

Bill is whisked off with the Doctor and Nardole to Turmezistan, where he finds the Monks, those slow, whispering, skeletal beings from Extremis popping up again.  Unlike other would-be conquerors of Earth, they won't take over the world unless they are asked.  It won't be easy saying no, as The Monks are able to see the future, and they give everyone a glimpse of what is to come.  It's a frightening future, one with death and destruction all around.

Talk about far-fetched, but I digress.

Clocks worldwide are now in sync with the Doomsday Clock, pushing the world closer and closer to midnight.  The Doctor stubbornly tells them not to surrender, but soon they do.  The Monks can see their motives are impure, as they are not surrendering out of love but out of fear or strategy.  As a result, they get vaporized. 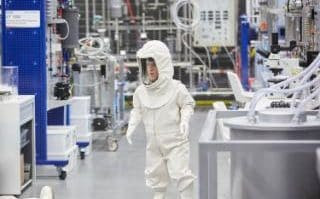 Meanwhile, back in the UK, two scientists: Erica (Rachel Denning) and Douglas (Tony Gardner) are going about their lives and work when something goes horribly wrong.  Douglas, slightly hung over or ill (I wasn't sure exactly which) causes an accident that releases a bacteria that kills all human life.  Douglas is disintegrated as he has no protective suit, while Erica does her best to get everyone out and contain the crisis.

The Monks continue asking for surrender, but nothing doing.  The Doctor soon hits upon the idea that they are watching something specific that will bring about Doomsday, and finds the lab about to release Enzyme EC31.  He takes Nardole with him there and attempts with Erica to stop it from being released.  He does this by setting up an explosion that will neutralize the bacteria, but there are a couple of hiccups.

First, Nardole is overcome by the bacteria which doesn't kill him but leaves him incapacitated.  Second, the lock the Doctor's in is a combination lock immune from the sonic screwdriver.  Unable to see the lock to release himself, the Doctor finally admits he's blind to Bill, who is still with the Monks.  Terrified of the whole situation, she surrenders on behalf of Earth on the condition they restore the Doctor's sight.

The accept the surrender as this consent comes from love (her love of The Doctor), but she calls out to him to 'get her planet back'.  Now the Monks have conquered Earth.

One aspect of The Pyramid at the End of the World was quite positive, and that was Denning.  She was pretty cool and collected as Erica, a whip-smart scientist who also cared about her coworker.  She would make a good Companion or at least returning guest star, her confidence and scientific professionalism mixed with rational fear but not panic at the growing crisis.

In fact, there was a lot of good acting all around in Pyramid.  Again, to my mind it stretches believability that no one noticed that the Doctor was blind but Capaldi overall gave a strong performance, particularly early on when he's in a meditative mood while playing his electric guitar.  Mackie continues to grow as one of the better if not best NuWho Companions, with Bill really being nothing more than an ordinary person caught up in these shocking situations.  She is caring and bright, and aware of all the risks surrounding her. 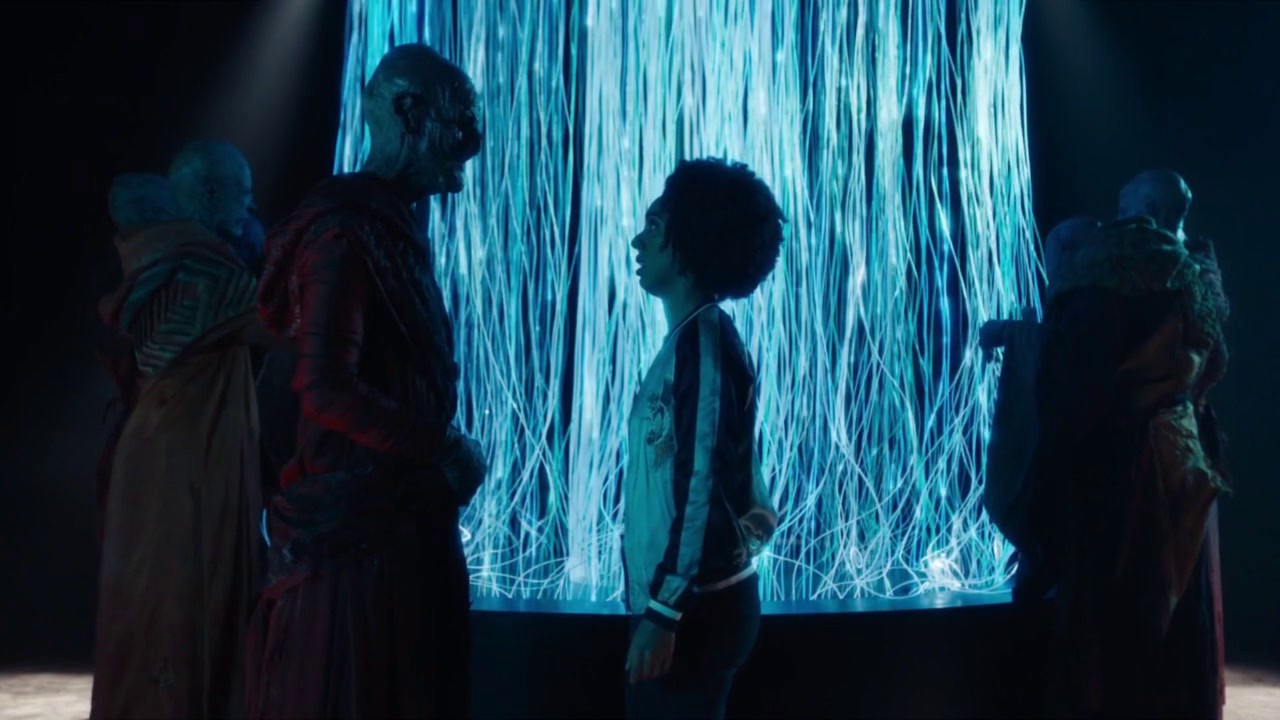 The great part of Pyramid is the tension about how to surrender.  They've thrown everything they can at the Monks, but nothing doing.  The episode keeps ratcheting up problems, and then comes up with plausible solutions, only to have a last-minute complication muck it all up.

Another positive element was in how Murray Gold's score was subtle, working with the episode to be menacing without drawing attention to itself or being its usual bombastic music.

There were things I wasn't too keen on.  As much as Pyramid wanted to be menacing I wasn't feeling it, probably because the Monks are monsters we've seen in other versions (still can't shake the idea they are kin to The Silence).  The whole 'interrupted date' thing was a bit much, and I get the sense that this isn't the first time we've seen a Companion sacrifice something to save The Doctor.

Still, relatively minor points, as The Pyramid at the End of the World created a strong story that is built on logic, is well-acted, and creates a strong problem to overcome.

"Fear is temporary, love is slavery," the Doctor says when others consider surrendering.  I'm not sure I entirely agree, but I can see where one would think that.  The Pyramid at the End of the World shows that when Doctor Who works, it works remarkably well.

Next Episode: The Lie of the Land