The Martian Chronicles of The Doctor 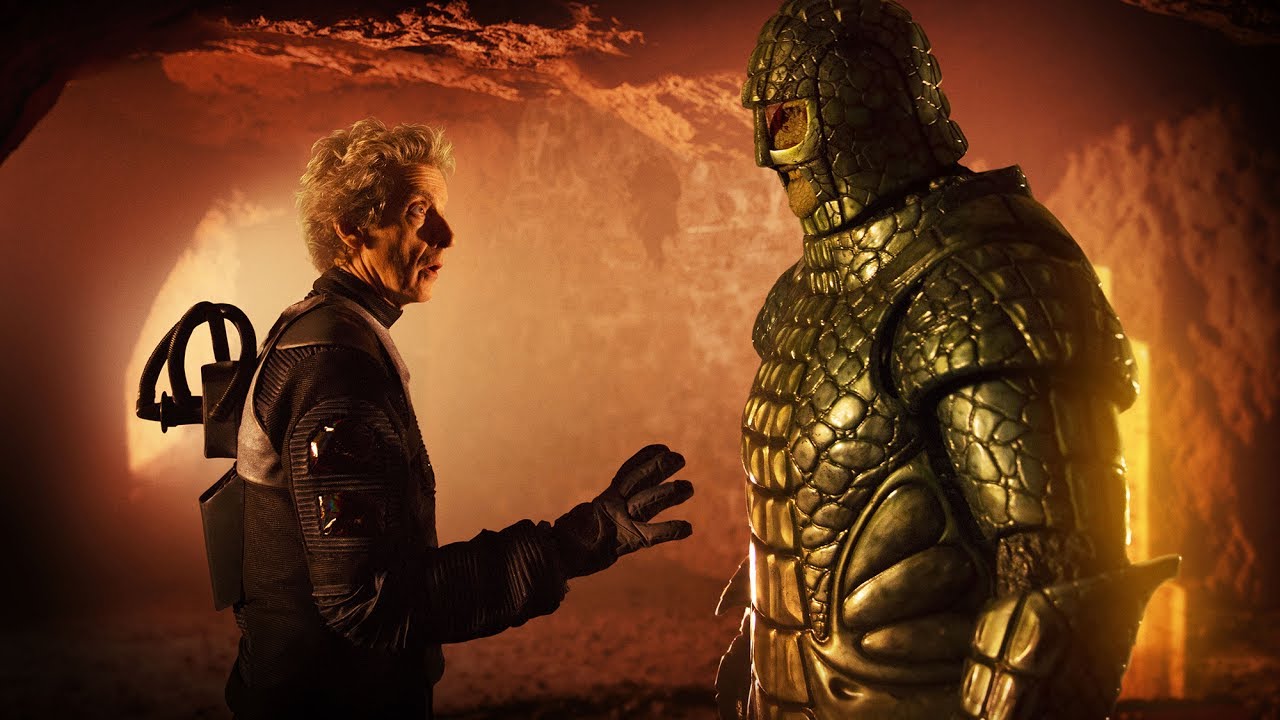 Some people, it appears, are easy to please.  Empress of Mars has received glowing reviews.  Doctor Who fans that I know were completely enraptured by it, and hold it up as some great moment in DW history.  I'm not sure why since Empress of Mars is a retread of what we've seen before: structurally and story-wise.  Mark Gatiss, who believes himself a genius, basically took the same ideas of his last Ice Warriors story, Cold War, and opted to use them again, this time with even less positive results.

Empress of Mars is pretty standard plot-wise: The Doctor (Peter Capaldi) and his Companions Bill (Pearl Mackie) and Nardole (Matt Lucas) go to NASA and see a message on the surface of Mars: God Save the Queen.

They go to Mars and find living underground a group of Victorian soldiers, led by Colonel Godsacre (Anthony Calf).  His second in command, Captain Catchlove (Ferdinand Kingsley) is hostile to a lot of what the Colonel wants, though both tell the Doctor and Bill that they came to Mars for a specific reason.  In South Africa, they found Friday (Richard Ashton), an Ice Warrior who is 'the last of his kind', and in return for helping him get back to Mars, Friday would get them Martian treasure.

There was none, and supplies and morale are low.  Fortunately, with the help of a giant laser named Gargantua, they uncover a tomb: that of Empress Iraxxa (Adele Lynch).  Despite the Doctor's warning against digging more into the tomb, rogue soldiers go in and try to steal treasure, awakening Iraxxa.

Well, she goes on attack, the Doctor negotiates something of a truce but Catchlove wants to strike.  Godsacre doesn't and orders no action against the awakened Empress, but Catchlove leads a coup where he reveals Godsacre was hanged for desertion but survives.

Iraxxa awakens her Ice Warriors, they begin fighting, Godsacre locks up Bill and The Doctor.  Nardole is written out of the script via going to the TARDIS, which conveniently drives itself away and is sent to Earth.

Ultimately, Godsacre kills Catchlove to stop the war, Iraxxa accepts him as a noble warrior, the war is averted and the Ice Warriors are welcomed by Alpha Centauri (92-year-old Ysanne Churchman, returning to do a cameo as the character she voiced in the Third Doctor stories The Curse of Peladon and its sequel, The Monster of Peladon). The Doctor, Bill, and Godsacre are the ones who made the message.  As for Nardole, he manages to come back, thanks to Missy (Michelle Gomez), whom in desperation Nardole got to pilot the TARDIS to Mars.

If you see Cold War and then see Empress of Mars, you'll note several similarities between them to where if both weren't written by Mark Gatiss, you'd thought the latter plagiarized the former.

In both, the TARDIS disappears by itself, leaving the Doctor and his female Companion stuck.

In both, the second-in-command is more aggressive in fighting the Ice Warriors than the actual commander, who advises caution.

In both, a soldier breaks into where the frozen Ice Warrior is and awakens it.

In both, the main Ice Warrior communicates to other Ice Warriors to come to his/her aid.

In both, the female Companion speaks directly to the main Ice Warrior to help him/her stop the fighting.

In both, the Ice Warriors and humans are mistrustful to the point of fighting.

In both, it is professional military people fighting the Ice Warriors (Soviet sailors in Cold War, Victorian soldiers in Empress of Mars).

In both, the humans have a doomsday-like device that can kill everyone (nuclear weapons in Cold War, the Gargantua laser in Empress of Mars).

Not only is Empress of Mars derivative of Cold War, but in terms of actual story it is so boring because we've seen it all before.

In what I think is an inconsistency, the Tenth Doctor was drenched in pop culture (he after all, cried reading the end of Harry Potter and the Deathly Hallows), but the Twelfth has no idea what Alien or The Terminator are (though, oddly, he does know about Frozen).

Empress of Mars has nothing going for it apart from Churchman's cameo, which to be fair would excite only Classic Who fans, NuWho fans having no reference point as to what that one-eyed funny-sounding thing was.

Gatiss could find no way of integrating the Nardole character into the story, so he was essentially written out of it in the clumsiest way.  Kingsley's villainous Captain Catchlove was a cartoonish villain who only needed to twirl his mustache to complete his Snidely Whiplash impersonation,

As a side note, giving the characters the names 'Catchlove' and 'Godsacre' has to be some sort of in-joke with Gatiss.

The entire opening of NASA and the TARDIS Three finding the message was unnecessary (they could have just landed on Mars and encountered the Victorians, then end it by leaving their patriotic message).

I'm sure Gatiss, who is convinced of his own genius, wanted to tell a story about colonialism/imperialism versus freedom fighters, whether the Doctor would sympathize with those invading or those being invaded.

It's all just too bad that he put in a standard story that looks almost as if it came from a template.

I don't think I've ever been as bored watching something as I was with Empress of Mars.  You knew were everything was going: you knew a soldier was going to break in and try to steal, just like you knew once that happened, the Ice Queen-Empress would awaken, you knew the Captain would overthrow the Colonel (the warmonger overtaking the pacifist).  You knew no one would listen to The Doctor.

Again, I don't understand why so many praise it (100% positive rating for it on Rotten Tomatoes).  Had no idea there were that many Alpha Centauri fans out there. Next Story: The Eaters of Light