The Master Plans of The Doctor 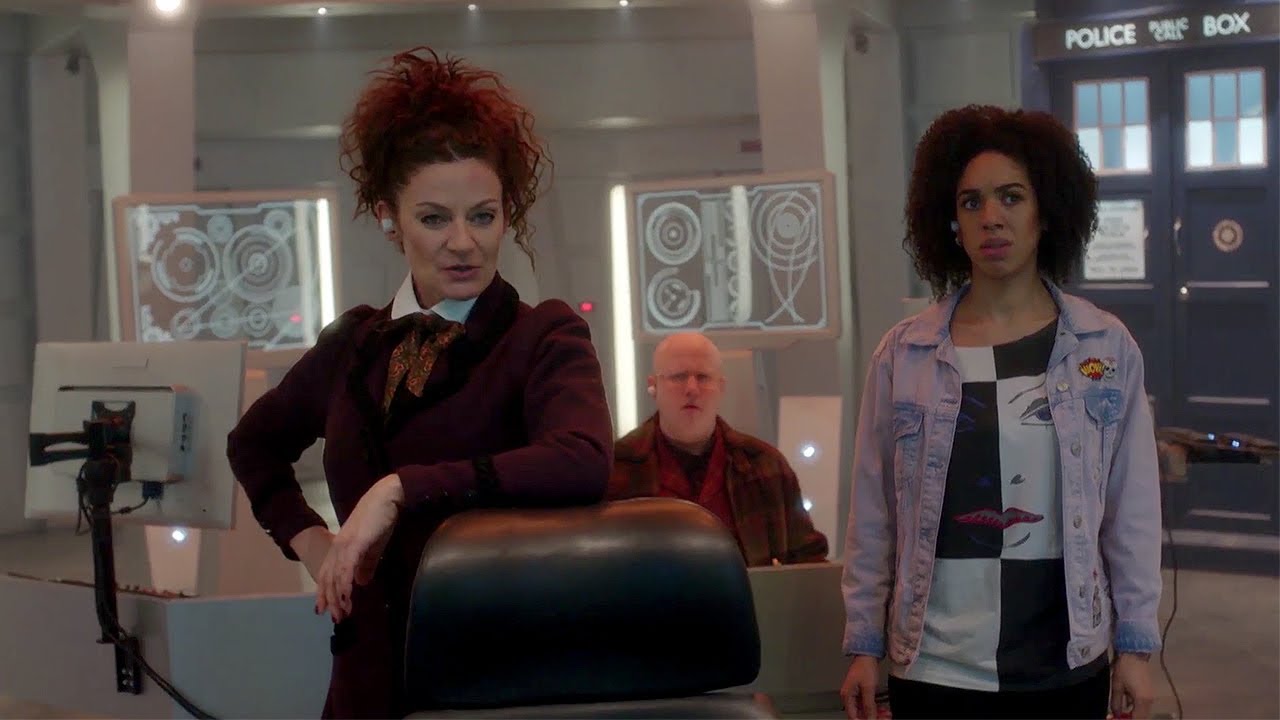 As we wrap up the final series/season of Peter Capaldi's turn as The Doctor, World Enough and Time informs us of a few things.

The Doctor's name may indeed be 'Doctor Who'.
The Doctor may have once been a woman.
Steven Moffat essentially created the Cybermen.

And those are just a few tasty tidbits from World Enough and Time, a reminder of two things: that when Doctor Who slides, it slides hard, and the Steven Moffat created everything: the Daleks, the Master, and now the Cybermen.

The Doctor (Peter Capaldi) wants to give The Mistress aka Missy (Michelle Gomez) a chance to be a good girl.  This chance comes when he sends her, along with his Companions Bill (Pearl Mackie) and Nardole (Matt Lucas) to respond to a distress signal on a ship.  Missy being Missy, she can't get things quite right.  She pops out of the TARDIS saying, "Hello, I'm Doctor Who", then proceeds to insult Bill and Nardole by calling them among other things, "Thing One and The Other One" and "Exposition and Comic Relief".

In fairness, that is what Bill and Nardole are, but is it wise to draw so obvious a point?

This ship is attempting to pull out of a black hole.  Things, however, are not going well in that the back of the ship is going at a faster rate than the the front of the ship, where they are at.  That is why it appears that there are thousands of people there when the original crew was only fifty.  Those now coming to the top are coming after humans, but none of them nor Jorj (Oliver Lansley) are human.

Bill is though, and Jorj shoots her dead, as humans are the ones the others are after.  Bill, however, is revived and repaired and even upgraded into a rudimentary Cyberman, with only the chest device. As time goes by faster for her than for The Doctor, The Mistress, and Nardole, she watches them figure things out while she works for and with Razor, a cleaner with a vaguely Russian or Slavic accent.

Bill also sees that many of the 'patients' at the Hospital are in terrible agony but not quite human.  She can hear them on their machines calling out 'Pain' and 'Kill me'.  She pushes on, waiting for The Doctor to rescue her. All the more the pity, for we find that Bill is in much greater danger than she or any of them can imagine.  It revolves around Operation Exodus, the efforts to escape from the dangers of the lower levels.

Razor, far from being a friend, turns out to be a foe, and a dangerous one at that.  By the time everyone else reaches the bottom, we find that Razor is actually The Master (John Simm), returned from I haven't the foggiest notion.

The Master and The Mistress: Together Again At Last...For the Very First Time.  Missy tried to change, but found it was simply too hard to do so.  She joins forces with 'the ex', and now they are in cahoots, leaving the Doctor and Nardole shocked.  Even more shocking is when they find themselves facing a Mondasian Cyberman, and that that Mondasian Cyberman is none other than Bill Potts transformed.

Bill-in-Cyberman form holds out her hand, saying "I waited for you", before we see a tear slide down from outside her.

How World Enough and Time and the second part of this two-part finale, The Doctor Falls, squares with the story of the Mondas Cybermen from the First Doctor story The Tenth Planet remains to be seen.  However, my sense is that Moffat clearly wanted to connect the Cybermen to himself.  The line the Master says about witnessing 'the Genesis of the Cybermen' just struck me as very odd.

That being the case, why shouldn't Moffat also take credit for bringing about the Cybermen?

There are some cringe-inducing moments in World Enough and Time that I think too many are willing to overlook.  The Mistress dabs. Nardole wants a selfie. The Master adopts a Slavic accent that borders on parody.

Leaving aside those naked appeals to Millennials that instantly date the episode (can you imagine the Third Doctor or The Master doing The Hustle?), I wonder about the logic of Gomez's interpretation of The Mistress.

This version apparently doesn't know or understand how The Doctor or his Companions work.  If we go back into his early days when interacting with the Third Doctor, you could see in Roger Delgado's work as The Master that he understood perfectly how people behaved.  In fact, part of the Master's appeal whenever hoodwinking others, apart from he used hypnosis, was that he used his charm.

Now, Moffat has made The Master/Mistress into this unhinged, irrational being.  I suppose because he went a little mad from childhood one could cut him some slack, but then we have to go back and wonder how as a child he went crazy, as an adult he became extremely rational, then at the Time War he went bonkers again.

Well, I won't beat this bit too much, but there are other elements that have me a bit nonplussed.

The Doctor at one point claims he doesn't remember if The Master or even himself was a man or a woman when they met at the Academy.  That strikes me as idiotic.  I'd like to know in what scenario the Doctor was ever a woman before Hartnell.  I'd also like to know how the Doctor claiming that The Mistress was "the only person I've ever meet whose even remotely like me?"

What does he mean by that?  In terms of being the only Time Lord?  I'm sure Romana would have something to say about that.  In terms of being involved in other worlds?  Again too, if we go back to The War Chief or The Meddling Monk, he can hardly make that kind of claim.

Part of it I think stems from Moffat's idea that his is the right one, and part of it stems from his ability to mock those who disagree with him.

In terms of the episode itself, I give credit that World Enough and Time echoed some horror film in the Cure for Wellness style: all the grays and dark looks of a world of terror.  It did have a very creepy feel to it.

Still, so much of it wasn't to my liking.  Simm coming back will have to open up questions of continuity, though in this case I'm hampered by the fact I haven't seen most of the Tennant Era do to the horror that was Love & Monsters.  I don't think he added much if anything other than 'oh, look, it's The Master'.

It was interesting that World Enough and Time went back and further back in the story, starting with the tease of the Doctor in the throes of regeneration, then to the arrival on the ship with Missy channeling her 'oh, I'm crazy and funny' shtick, then further back to getting Bill and Nardole to do this test-run.

As much as I may have thought it bad, there were good things in it.  There's the aforementioned cinematography, and Pearl Mackie's performance.  She has become one of NuWho's best Companions, and deserved a better fate than she got, especially when you compare it to Clara's eternal sendoff.  Her fears, her hopes, and her sadness all came shining through.

I watched World Enough and Time with very little interest and a strange puzzlement as to why so many praise it.  I look at this first part as nothing more than Steven Moffat deciding it was better for him to write his fanfic as Canon than in giving either Peter Capaldi or Pearl Mackie a proper finale.

Next Episode: The Doctor Falls
Posted by Rick at 6:19 PM